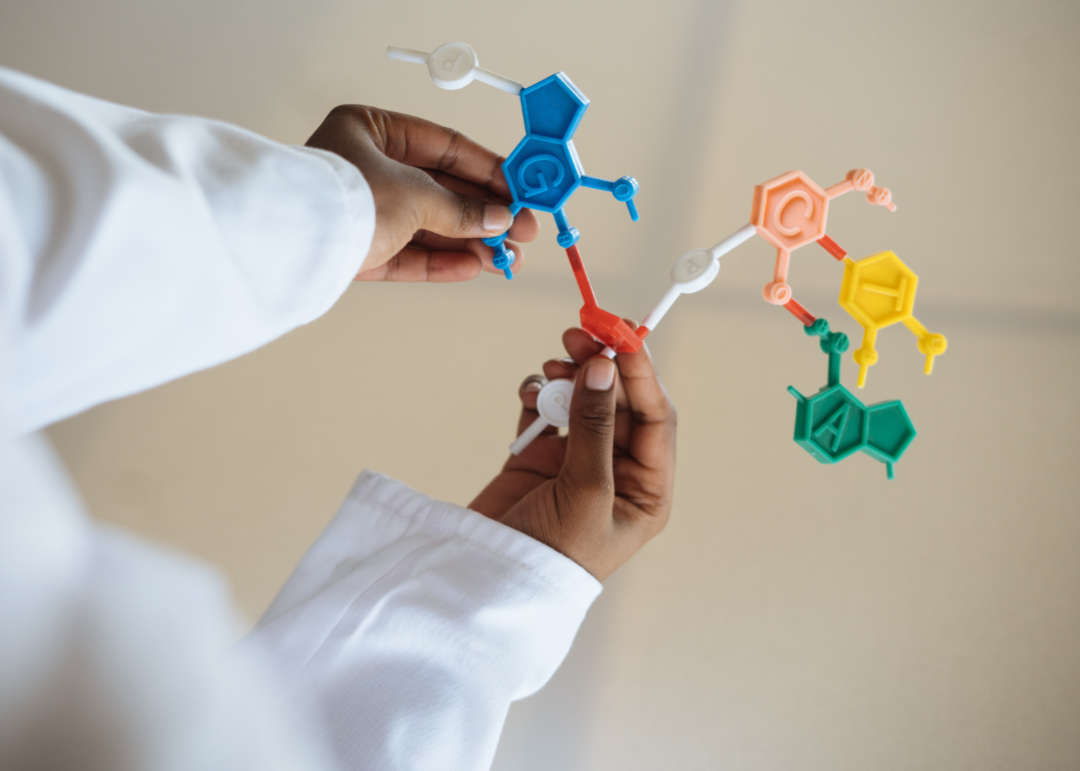 What is Peptide Therapy?
A peptide is a short chain of amino acids that are linked together, and can be thought of as a small protein. To date, over 7,000 naturally-occurring peptides have been identified. In our bodies, these small proteins typically act as signaling molecules. They bind to receptors on the cell surface and tell other cells and molecules what to do.
Peptide therapy, or the use of specific peptides in treatment, has gained great popularity in recent years. This is due largely to the fact that these peptides are highly specific (i.e., only do what you want them to do) while also being well-tolerated and safe. As of January 2015, there were over 60 US FDA-approved peptide medications, 140 peptide drugs being evaluated in clinical trials, and 500 in pre-clinical development.
Most of these peptide drugs are administered intradermally, with an insulin syringe, but can also come in the form of transdermal creams, nasal sprays, and oral tablets.

What Conditions Does Peptide Therapy Address?
Because these peptides are so numerous and variable in structure, their effects are likewise varied and wide-ranging. One class of these peptides are known as growth hormone secretagogues, and cause the secretion of one’s own, natural hGH in the body. These peptides have been shown to be very useful in the treatment of age-related conditions, osteoporosis, obesity, and various chronic inflammatory diseases, and have several advantages over traditional hGH administration.
Another type of peptide drug is composed of part of the hGH molecule that is responsible for fat cell death and has been shown to be very effective as an anti-obesity drug. In addition to decreasing inflammation, these drugs lead to increased lean muscle mass and decreased body fat. A certain class of peptide drug has been used to help prevent skin cancer by increasing the melanin in one’s skin, causing a darkening effect that mimics a quality suntan. This peptide has also been shown to increase lean muscle mass and improve sex drive.

Would You Benefit From Peptide Therapy?
Peptide therapy encompasses numerous different drugs with varied effects, ranging from immune modulation and tissue repair to fat loss and muscle building. Our center has seen very positive results in patients with CFS, Hashimoto’s thyroiditis, Lyme disease, and fibromyalgia, among other conditions. Speak with your Physician to see if one or more of these peptides may be right for you.

Thymosin Alpha-1
Thymosin alpha-1 (T α 1) is a peptide, or small protein, consisting of 28 amino acids. T α 1 is produced naturally by the thymus gland. The thymus is located behind the sternum and between the lungs and is where immune cells known as T cells mature and are released, prompted to do so by the T α 1 peptide. T cell production and action within the body is vital to adaptive immunity—the mode by which immune cells are able to recognize and eradicate foreign invaders.

Current Uses
T α 1 has been found to have a profound effect on the immune system, and is the active ingredient in the immune modulating drug, Zadaxin®. Zadaxin® is used to treat hepatitis B and C, and has been studied extensively for its ability to support an immune system that has been suppressed by chemotherapy in cancer patients.

T α 1 Helps Support Important Immune Cells
Specifically, T α 1 has been shown to enhance the function of certain immune cells called T and dendritic cells. This is very important to anyone with a depressed immune system or suffering from an infection, as these white blood cells play pivotal roles in the body’s defense process. T cells, for example, come in two forms: killer and helper T cells. Killer T cells are responsible for hunting down and destroying our body’s own cells that are cancerous or infected with bacteria or viruses. Helper cells work with the other cells of the immune system to orchestrate and carry out appropriate immune responses.

Dendritic cells are just as valuable to our body’s defense system. These cells gather important information about infection or the presence of cancerous cells, and communicate with the T cells, who then act appropriately to eradicate the unhealthy cells and stop the infection or cancer growth. T α 1 itself has been shown to exhibit antibacterial and antifungal properties, suppress tumor growth, increase vaccine effectiveness, and protect against oxidative damage.

Infection and T α 1
Studies have shown that individuals fighting infection have a lower amount of circulating T α 1 and suppressed helper T cell numbers compared to healthy individuals. This is problematic, as optimal immune function is vital to recovery from infection. Supplementation with T α 1 has the potential for great therapeutic benefit for patients suffering from infection or autoimmune disease.

T α 1 assists the immune system in the location and eradication of the Lyme bacteria and infected cells, while helping to prevent oxidative damage, thereby decreasing inflammation and enabling better quality of life throughout treatment.

Administration and Side Effects
The T α 1 peptide can be administered via subcutaneous injection. T α 1 has been found to be very safe, and there have not been any documented side effects associated with its administration. It is approved in more than 37 countries for the treatment of hepatitis B, hepatitis C, and as an adjunct to chemotherapy and various vaccines.

Thymosin Beta 4
Thymosin beta 4 (Tβ4) is the predominant form of thymosin in our bodies. It has been found in high concentrations in wound tissue and certain blood cells involved in clotting, signifying its important role in the healing process. In fact, recent studies have revealed that the first gene to be upregulated after an injury is the Tβ4 gene. As the body begins the recovery process, Tβ4 aids in the creation of new vessels in the injured area, which carry blood, nutrients, and reparative substances to the site. Tβ4 also has anti-inflammatory properties and works to decrease the number of inflammatory substances, called cytokines. Inflammation plays a large role in many of the symptoms associated with a large number of conditions (i.e., Lyme disease, CFS, FM, autoimmune diseases, infections, etc.), making the potential impact of Tβ4 quite extensive.

Supplementing with Tβ4
The discovery of the role of Tβ4 in the process of immune regulation has led to its use as a valuable therapeutic agent. Tβ4 has been used in the treatment of HIV, AIDS, Influenza, colds, and various infections. It has been utilized in the management of various inflammatory conditions, as well as part of treatment following heart attack due to its cardio and neuroprotective effects. Tβ4 has been used at our clinic with a great deal of success in patients suffering from Lyme disease or other infectious and/or inflammatory conditions. Tβ4 is very well tolerated and has not been found to cause any significant side effects. It can be taken on its own or in conjunction with an existing therapy, making it a versatile and valuable drug.

Growth Hormone Secretagogues (GHSs)
This class of peptides includes several therapeutics that stimulate growth hormone (hGH) secretion. Each peptide varies slightly as far as structure and mechanism of action. Thus, a certain peptide may be preferred depending on the patient’s health status and desired outcome. GHSs include: CJC 1295, GHRP 2, GHRP 6, Hexarelin, and Ipamorelin.

CJC 1295
This particular peptide offers therapeutic benefits similar to those of hGH. CJC 1295 is a growth hormone releasing hormone (GHRH) analogue. In other words, it is a molecule that serves the same purpose as does GHRH—the hormone that stimulates the anterior pituitary to release hGH. However, unlike GHRH, which has a half-life of only minutes after IV administration, CJC 1295 is able to remain active in the body for extended periods due to its ability to bind to a protein in the blood known as albumin and avoid degradation by various enzymes. CJC 1295 increases an important growth factor, IGF-1, in addition to hGH, leading to fat loss, lean muscle growth, and enhanced sleep.

Ipamorelin
Ipamorelin stands out among other GHSs due to its enhanced specificity. This peptide generates similar increases in growth hormone secretion, but without the appetite stimulation and increase in cortisol, acetylcholine, prolactin, and aldosterone seen with other peptides in its class. This peptide has been found to be very well-tolerated.

Melanotan II
Melanotan II is an analogue of alpha melanocyte stimulating hormone, the hormone responsible for pigmentation in skin and hair. This peptide has been shown not only to increase skin pigmentation, resulting in a substantially tanner skin tone, but also to stimulate fat loss and increase libido. Its aphrodisiac effects were so substantial that it was the basis for the development of another peptide designed exclusively to address erectile and sexual dysfunction—Bremelanotide PT 141.

Bremelanotide PT 141
Bremelanotide PT 141 was developed from Melanotan II, targeting its aphrodisiac effects. This peptide has been shown to have a substantial effect on libido, generating sexual arousal in both men and women within minutes of administration. It has been shown to be effective in treating erectile dysfunction, even in men who have not responded to other ED treatments, such as Viagra. This peptide is also able to cross the blood-brain-barrier, bypassing the vascular system and acting at the level of the central nervous system. This property gives Bremelanotide an advantage over traditional ED drugs, which can decrease blood pressure to dangerous levels. This peptide can be administered as a nasal spray, making its use convenient and discreet.

SARMs S4 & S22
SARMs are selective androgen receptor modulators. Androgens are naturally occurring hormones—such as testosterone—that regulate the development and maintenance of male sex characteristics. SARMs provide the benefits of anabolic steroids (i.e., increased muscle mass/strength, fat loss, increased bone density, increased libido) without the quantity and/or severity of unwanted effects. SARMs are not toxic to the liver, separating them from most oral steroids and making them an attractive treatment option to those looking to benefit from anabolic steroid drugs.

Cerebrolysin
Cerebrolysin—also known as FPE 1070—is a synthetic nootropic drug. Nootropic drugs are substances that enhance cognitive functions such as memory, creativity, and motivation in otherwise healthy individuals. This peptide is extremely small, allowing it to penetrate the blood-brain barrier and act directly on the neurons of the central nervous system. Cerebrolysin has been found to improve the metabolic activity of brain tissue, shield neurons from harmful substances, and stimulate the peripheral and central nervous systems. In addition to its utility as a nootropic substance, the drug has potential as part of a treatment plan addressing Alzheimer’s disease, stroke, and moderate to severe head injury.